Pulling On One's Shoe In a Melon Patch, Or Adjusting One's Cap Under A Plum Tree 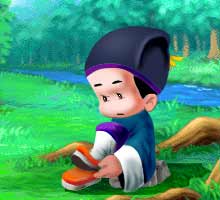 Emperor Wen of the Tang dynasty was a very democratic ruler. Before doing anything, he would always ask the opinion of his ministers. Once he asked Liou Gung-chiuan how the people felt about the government. Liou Gung-chiuan respectfully answered, "Concerning your sending Guo Min to be in charge of Bin-ning, some people are in favor and others are not." Emperor Wen appeared very unhappy, and said, "Guo Min is an upright and law-abiding official; of course he is qualified for the job." Liou Gung-chuian agreed, but added, "The people who are criticizing you think that he bribed you with his two head and said, "They've misunderstood. Guo Min's daughters came to the palace to pay their respects to the empress dowager, not to act as my concubines." Liou Gung-chuian replied, "Yes, but this is like the suspicion aroused by pulling on one's shoe in a melon patch or adjusting one's cap under a plum tree. How can you make all the people understand?"