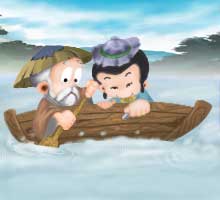 During the Spring and Autumn Period, there was a man who hired a small boat to take him from the north end of the Yangtze river to the south end. As the boat got out into the middle of the river, the man was admiring the beautiful scenery. He began to sing a song and beat time with the sword he was carrying in his hand. Suddenly a strong wind came up and created a wave which rocked the boat so hard that the man's sword fell into the river. This was the man's most treasured sword. He was about to jump in after it, when he decided that he should first make a mark on the side of the boat at the place where the sword had fallen in. That way, he reasoned, he would be sure to find it. Having made the mark, he ordered the boatman to stop, took off his shoes and long coat, and jumped in the water. He looked all around, but couldn't find his sword. Utterly exasperated, he said to the boatman, "Do you see this mark on the side of the boat? This is where my sword fell into the river! So how come I can't find it?"

Today, a person who refuses to listen to logic, but stubbornly adheres to his own opinions, can be said to "carve a mark in the boat and look for the sword."