To Mistake The Reflection of The Bow For a Snake 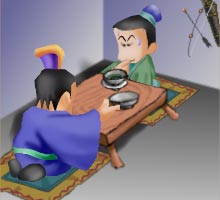 During the Chin dynasty, there lived a man named Yue Guang. One day, he realized that there was one of his friends whom he hadn't seen in awhile, and sent someone to call on him. The friend said to his visitor, "A few days ago, I was drinking wine at Yue Guang's house, when suddenly I noticed a snake in my glass! I felt very uncomfortable, and barely finished the wine. Ever since I got home that day I've been sick, and I just know it's that snake acting up in my stomach!" When word of this got back to Yue Guang, he immediately thought of the bow that was hanging on his wall. If this bow were reflected in a glass of wine, when the wine moved, wouldn't the reflection resemble a small snake? Yue Guang quickly invited his friend over and explained this theory to him. When the friend heard this, he was very relieved, and suddenly his illness disappeard.

Now, when a person needlessly worries about some small or imaginary thing, we can say that person is "mistaking the reflection of the bow for a snake."