To Look At Someone With New Eyes 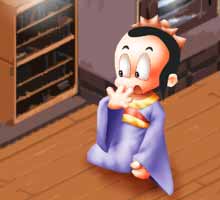 Lu Meng was a general of the kingdom of Wu during the Three kingdoms Period. His family was poor and had no money to send him to school, so instead the drilled very techniques, and in the end, became a general.

One time, Emperor Sun Chiuan told Lu Meng that both Emperor Guang Wu of the Han dynasty and Tsau Tsau of kingdom of Wei were very learned people, and suggested that he, too, being a high-level government official, ought to find some time to study.

From then on, Lu Meng put all his efforts into studying, and he soon became extremely knowledgeable. The minister Lu Su came to him one day to discuss military affairs, and was greatly surprised to discover that the general's theories and ideas were brilliant. He said to Lu Meng, "I never thought you would become as learned as you are today. you're not the same person you were before!" Lu Meng laughed and said, "You need only be separated from a person for three days, and you will see him with new eyes!"

Today, when a person does something that causes others to see him differently, we can say that people "look at him with new eyes."