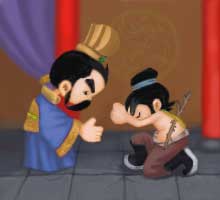 To Proffer a Birch and Ask For a Flogging

Because Lin Shiang-ru returned the jade intact to Chao, the king of Chao made him an official of the very highest rank. General Lian Po had greatly served his country in battle, and believed it was unjust that Lin Shiang-ru should have a higher rank than his own. So the general told his troops that he was going to put Lin Shiang-ru to shame if he ever met up with him. After Lin Shiang-ru heard about this, he went out of his way to avoid Lian Po at all costs. Lin Shiang-ru's subordinates felt that he was being very cowardly, and thereafter wanted nothing to do with him. But Lin Shiang-ru said to them, "I'm not even afraid of the king of Ch'in, so why should I be afraid of General Lian Po? It's because of the two of us that Ch'in does not invade Chao. If we were to disagree, it would be just like two tigers fighting; in the end, one of us would be killed, and then Ch'in would attack." When Lian Po heard about this, he was so ashamed that he took off his shirt, and with a birch branch in hand, asked Lin Shiang-ru to flog and forgive him.

Today, this idiom can be used to describe any situation in which a person knows he has done wrong, and asks the person whom he has wronged to punish him.